skip to main | skip to sidebar

Optimism and Billionaires: Any equation


At one point I mentioned my impressions of our host to News Corp.'s Philips, who works closely with Rupert Murdoch. "That's something I've noticed about these moguls," he replied. "They're almost always the most optimistic person in the room."

Interesting article. Web 2.0 is centered around Google. I thought about it but not as intensive. Let the IT Gods bless every one and every one profits. I don't want to see that.

No matter I am bullish on the stock and respect the people working over there. I have little concern over the stock prizes of tech firm.

Thomas Hawk submits: Dave Winer has an interesting observation out today about the Web 2.0 bubble. Since most of the Web 2.0 companies are not going public, the question Dave raises is how will we know when the bubble bursts. Dave suggests that we'll know when Google's (GOOG) stock crashes.

Since most Web 2.0 companies are not selling stock to the public, and are mostly funded by VC money, the argument would be that we would not likely see a dramatic fallout like we did with the tech stock market in 2000-2002.

But Dave thinks that Google has a big impact on the health of the Web 2.0 playground and that as go Google's prospects, so goes Web 2.0.

And this might be true to the extent that so many Web 2.0 companies business plans are built on eyeballs and advertising. But there are some that are generating real revenue and real profits and these might be the ones that survive even if we do see a Google induced Web 2.0 crash.

With Google's current P/E ratio sitting at about 60 times earnings it does make you wonder: Is Google's stock price already set for perfection? What if advertising revenues don't come in in line? What if there are cracks beneath the surface of Google that we don't know about?

Earlier today, on his Real Money Radio Show, Jim Cramer was lathering Google up good, like only he knows how. He was praising the pathetic Verizon deal (there is no way people are going to pay $15 per month for YouTube on their phone) and telling viewers that they need to buy Google now. This kind of stuff worries me. Cramer is pure hype. And hype builds speculation which builds panic which builds crashes.

Of all of the stocks in the Standard & Poor's 500, Google has the 11th highest overall analyst rating out there. Wall Street could not be more bullish on the stock. Buy, buy, buy, buy. But there is very little room for more enthusiasm left on the stock. A single solitary analyst, Philip J. Remek over at Guzman & Co. (an investment company that no one has heard of of course), is the only analyst on Wall Street saying sell. And even there Guzman's target price for the stock is $460 a share, a mild drop from where it sits today. Contrast that with Safa Rashtchy over at Piper Jaffray who says that Google is going to go to $600 a share or with Mark Rowen over at Prudential who says that Google is going to go to $575 a share and you really do have a stock priced for perfection.

Personally, I'm scared of Google's stock price. I don't own the stock myself and worry that it could be set for a fall. And if it falls, I worry that Dave might be right and that the collateral damage that impacts the entire Web 2.0 could hurt a lot of great companies and businesses.

Check out the all-new Yahoo! Mail beta - Fire up a more powerful email and get things done faster.

Bid for gambling company, Is it a gamble?

Coming on the heels of last month's $15.5 billion offer by Apollo Management Group and Texas Pacific Group to buy Harrah's Entertainment, the largest casino operator in the world, a second buyout group is now considering an offer for the company. The new offer, led by Penn National Gaming, which owns casinos and racetracks, and D. E. Shaw, the hedge fund, sent shares up 2.5% yesterday after it was announced on CNBC. Any buyout would require the new owners to obtain a license to operate gambling businesses in the state of Nevada, a requirement that has stymied deals for casino operators in the past.
Related links: Media coverage: Las Vegas Business Press. Commentary: Who Will Acquire Harrah's? * Valuing the Casino Industry: Are There More Harrah's Out There? * Harrah's Seems Underwhelmed by Buyout Offer * Harrah's Gamble Not Without Risk * Bidding Up Harrah's.
Potentially impacted stocks and ETFs: Harrah's Entertainment (HET), Penn National Gaming (PENN) * Competitors: Wynn (WYNN), Las Vegas Sands (LVS), Trump Entertainment Resorts (TRMP), Monarch Casino & Resort (MCRI), Pinnacle Entertainment (PNK).

read more from seeking alpha
Want to start your own business? Learn how on Yahoo! Small Business.

Its of utmost important what I am saying here, People always want to be successfull, unfortunately or fortunately for many financial independence is the definition of success.

I understood it takes great effort to make money but at the same time it doesn't guarantee any thing more. I found these lines very very interesting read more

“lifestyle security comes from financial independence. I’m doing what I want to do and it just so happens that is where the money is.”

How to avoid the classic entrepreneurial mistakes

# Current assets should be at least twice that of current liabilities and the total debt-equity ratio should not be greater than 1:1

# There should be a growth in earnings per share (EPS) of 10 per cent per annum over the last seven years The two valuation criteria are:

1.The current share price should not exceed 20 times the average EPS in the last seven years for companies with a seven-year growth (GAGR) higher than 20 per cent. For companies with past growth rate between 10 and 20 per cent per annum, the multiplier has to be the growth rate itself. In other words fair value is the average EPS of the last seven years multiplied by the P/E ratio specified as above

2.The current price should also not be more than 1.5 times the latest book value.

If you take money at a valuation that is not sustainable and the market corrects and you need more, you will often be facing a cramdown/restructuring where everyone gets wiped out and the new money owns the company

The problem with lofty exit expectations is that once they are dashed by new market realities, you will often lose your investors and employees who were sold on an outcome that is no longer possible

He mentioned that New Money owns the company. From an entrepreneur point of view does it really matter as long as he holds a considerable equity. I cant comment on this. Of course market will always correct the valuation when its on the either side.

Yes the second one makes more sense. Exit expectations should be a a decision of all the major stake holders. No one can belittle sweat equity.

So here are the things that those "survivor" companies had in common:

* Committed entrepreneurs who were in it for more than just money

* Less capital raised and less preferences on top of the founders

Isnt it some thing which he says indirectly that dont have high ambitions.

Reasonable exit strategies,If the market is offering you one is there anything wrongs in taking it.?

Less capital raised, is it you are telling in terms of part with less equity

Indians are the start-up kings of US- The Economic Times

Indians are the start-up kings of US. Indian immigrants to the US account for 28% of all foreign-founded private start-up companies in a climate dominated by immigrant entrepreneurs, according to a new study on the hot-button issue. The study found that over the last 15 years, immigrants have started one in four (25%) US public companies that were venture-backed, representing a market capitalisation of more than $500 billion

The study also found that immigrant founders are responsible for building a high percentage of the most innovative American companies, with 87% operating in sectors such as high-tech manufacturing, infotech and life sciences.
article is throws a light about Indian entrepreneur and the important part played in startups.
The surely could have mentioned some names like Ram Shriram, Vindh Khosla etc

I'm glad to have readers like Deepa who has some interesting insights and would like to know more about real estate sector. Here I make an attempt to understand the goings on
in the Real Estate sector and how and why it is a good investment option.

RBI
thinks the real estate sector is a bit heated up or prone to be over
heated. So there might be some go slow on Real Estate Mutual Funds and
Real Estate Investment Trusts (REIT) but they are bound to come, sooner
or later.

Warren Buffett  - the greatest investor of this generation. What makes him click

from his famous speech in 1984 Columbia Business School

2) Look for the value of the company as a whole.

Buffett gave the example of the Washington Post Company, which, in 1973, was selling for $80 million in the stock market. At the same point of time, the assets of the company were worth not less than $400 million. So the price of the business was much less than its value. And that made it a good buy.

3) Look for the total worth of business

4) Psychology of investors.
The higher stock prices go, the more they appeal to investors, a psychology that often proves detrimental to the interests of both investors as well as the market.

As Buffett pointed out in the speech, "He's not looking at quarterly earnings projections, he's not looking at next year's earnings, he's not thinking about what day of the week it is, he doesn't care what investment research from any place says, he's not interested in price momentum, volume or anything… He's simply asking: What is the business worth?"

Thanks DNAIndia for amazing article. 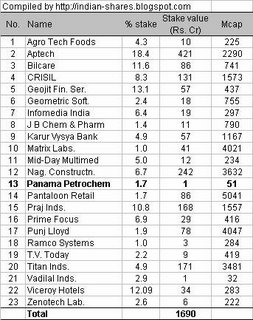 The above portfolio of RJ is as declared to stock exchanges as on Oct 31, 2006. I shall update the same as and when more information is filed with the exchanges.

Note: Panama Petrochem Ltd is the new stock addition to the master investor's portfolio in September 2006 quarter. I shall shortly post more research on Panama Petrochem on this blog.
Disclaimer: Please dont invest just because he invested in it. The message got to me from an elite group which has key peoples working in indian stock exchange.

Vijaychandran Veerachandran
One who set higher standards for anything I am on.I always believe in personal Mission and Vision.